In the different varieties the truffle is more widespread than you think. More than one hundred varieties of truffles are currently known, of which 63 are classified as Tuber. In Italy there are 25, but only 9 of them are recognized as edible by law.

From the biological and morphological point of view, as well as organoleptic, the Tuber species present significant differences between them.

The determination of the different species of truffles is essentially based on morphological characters such as shape, size, color, ornamentation of the peridium, appearance of the pulp, aroma and flavor.

The determination of the species in the laboratory, on the other hand, takes place through the recognition of the spores or with biomolecular analysis techniques.

Black and white truffle: the differences

Before analyzing the commonly marketed species, a first general distinction must be made between the white truffle and the black truffle.

They differ greatly in their external appearance: one yellow / brown color, one black color; one smooth, rough and / or punched the other.

The interior is also very different, with pulp colors ranging from yellowish white to brown-gray.

However, what most differentiates these two types of truffles is the scent: the white one releases a mixture of different, powerful and harmonious aromas (garlic, honey, hay, spices), while the black has a less marked, simpler scent, retained by the thick rind with hints that recall musk, roots and mushrooms.

“Magnatum” (lat.) = of the magnates, rich and noble gentlemen; “Pico” from Vittorio Pico, name of the Piedmontese doctor who first analyzed and described it in 1788. 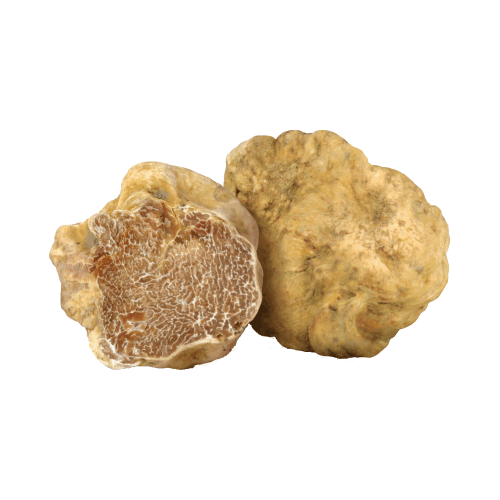 Shape: the shape is irregular if it encounters difficulties in growth (caused by the compactness of the soil), otherwise it is rounded. The dimensions vary from a few grams, even one, to over the kg in rare specimens.

Peridium: it is smooth, slightly velvety; the color varies from white to ocher yellow to olive yellow.

Pulp: the color varies from white to pink to brown and has numerous white veins.

Scent: delicious, fragrant, strong and delicate at the same time. At the right degree of ripeness it recalls garlic and honey, but also hay and spices. If left to rot, the perfume will change into a fermented and ammonia smell.

Harvest period: from September to December.

The fruiting body of the Tuber Magnatum, located on average at a depth of 20-30 cm, is usually isolated; sometimes, however, large specimens can be found, formed by many individual carpophores that have joined together in a single agglomerate. What amazes in the production of prized white truffles is the almost millimeter precision with which every year, if conditions permit, the fruiting body is reformed in the exact same point.

“Aestivum” = which grows mainly in summer; “Vittadini” from the name of the botanist Carlo Vittadini who first analyzed the species. 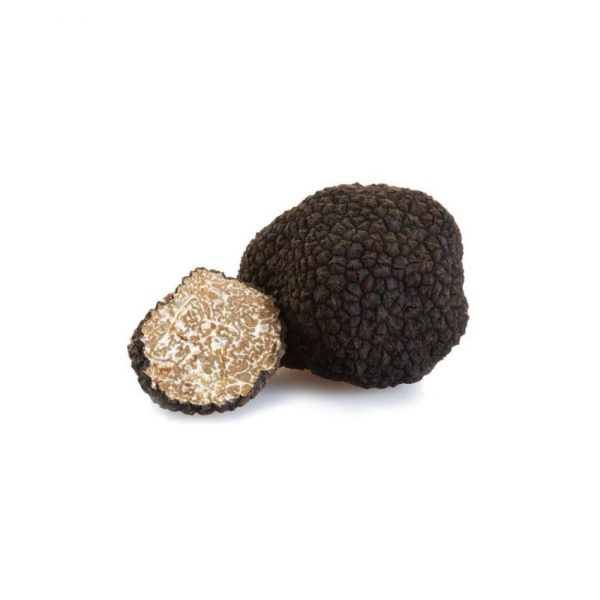 Vulgar name: it is commonly called scorzone – as a reference to its thick rind – or summer truffle.

Shape: it is now commonly rounded. The dimensions and weight are very variable, from a few grams up to over half a kg.

Pulp: the internal part is white when not yet fully ripe and hazelnut when it reaches maturity; it is also furrowed by numerous white veins.

Scent: delicate and pleasant, it vaguely recalls the aroma of mushrooms; tenuous when young, marked when fully ripe and if closed in a container.

Harvest period: from May to November.

In general, the fruiting bodies of the Tuber Aestivum species are quite superficial and even level with the ground if they are produced in very compact soils. As they develop, they lift the earth and form characteristic cracks; at other times in the truffle ground a real ring with the more or less raised earth is visible, caused by the truffles that are growing.

In environments with dense vegetation, the fruiting bodies develop for the most part isolated, while in the sunniest environments and in the presence of “pianello” they are mainly in groups. Truffles can be located near the trunk of the host plant, inside the “burnt” or at the limit between it and the surrounding vegetation.

“Melanos” and “sporum”= black spores; “Vittadini” from the name of the botanist Carlo Vittadini who first analyzed the species. 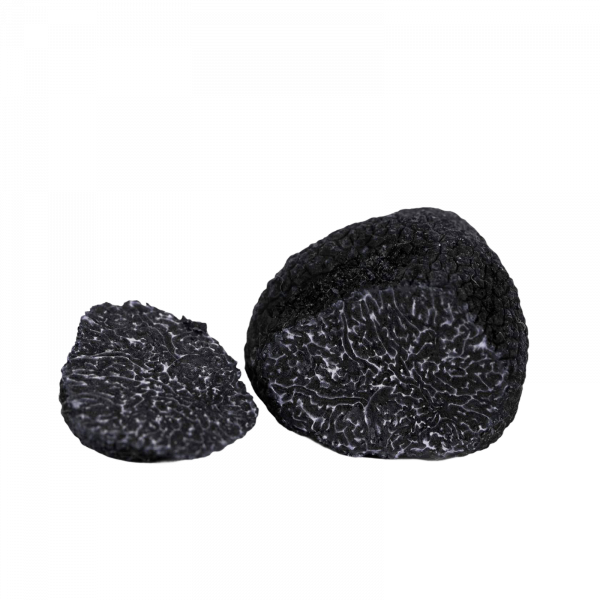 Shape: mostly round in shape, but sometimes also irregular and lobed if it grows in soils with abundant skeleton; the size is variable reaching the maximum size of a potato.

Peridium: with a warty surface, with warts with a depressed apex of pyramidal shape and intermediate size (3-5 mm) that adhere strongly to the gleba. The color of the peridium is black, sometimes with ferruginous zones; in immature specimens it tends to wine-red.

Pulp: black-brown, tending to purplish or reddish; the veins are whitish dense and thin, with well-defined contours and accompanied by two translucent brown bands on the sides.

Scent: aromatic, particular, tending to sweetish (so much so that it is called “sweet black” truffle).

Harvest period: from November to March.

In the fine black truffle, the beginning of fruiting takes place in July, when profound changes to the climatic conditions of the soil take place: temperature elevation, lowering of humidity and oxygenation.

The first productions of T. Melanosporum give superficial truffles, with a reddish slope and a weak scent, which are not preserved. The subsequent production, which runs from December to February and can continue until March, provides the best carpophores. The fruiting bodies of Tuber Melanosporum, which are generally always isolated, do not reach the maximum size of those of the prized white truffle.

“Uncinatum”= for the crests of the spores, hook-shaped; “Vittadini” from the name of the botanist Carlo Vittadini who first analyzed the species. 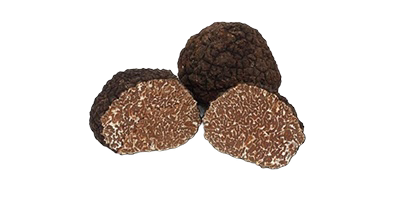 Shape: it is very similar to the tuber aestivum of which according to some authors it constitutes a variety.

Peridium: the small pyramidal punches are smaller and not transversely striated (variable character).

Scent: with references to the earth, roots and mushroom, therefore similar to scorzone, but more intense and marked. 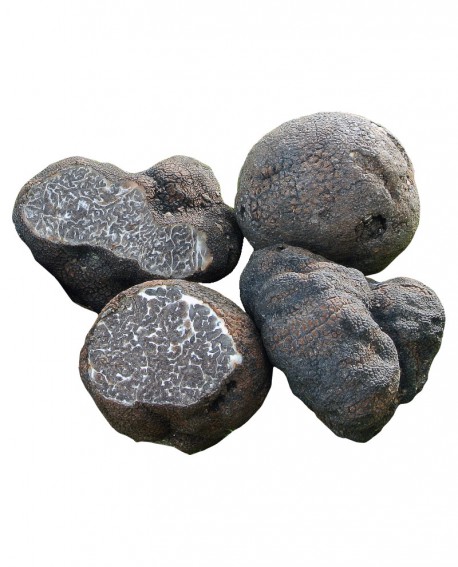 Shape: globular or tuberculous in shape; generally it does not reach considerable sizes, at most like an egg.

Peridium: warty, reddish brown in color, sometimes with rust-colored spots; the punches are just pronounced and polygonal, as if pressed, which gives it a dog-nose appearance.

Pulp: whitish brown that of immature carpophores, then ferruginous brown with clear, numerous veins, in some points slender, in others large, which in contact with the air turn pale brown.

Harvest period: from August to December.

In Italy its presence is reported almost everywhere and in quite heterogeneous environments. Normally the Tuber Macrosporum is found in the same stations as the Tuber Magnatum, with respect to which, however, it tolerates more drought, while it is never found in the environments of Tuber Melanosporum.

This truffle, which bears fruit from September to December, has the characteristic of producing, in the same hole, numerous specimens of varying sizes, but always quite small.

“Brumalis” = which grows in winter; “Vittadini” from the name of the botanist Carlo Vittadini who first analyzed the species. 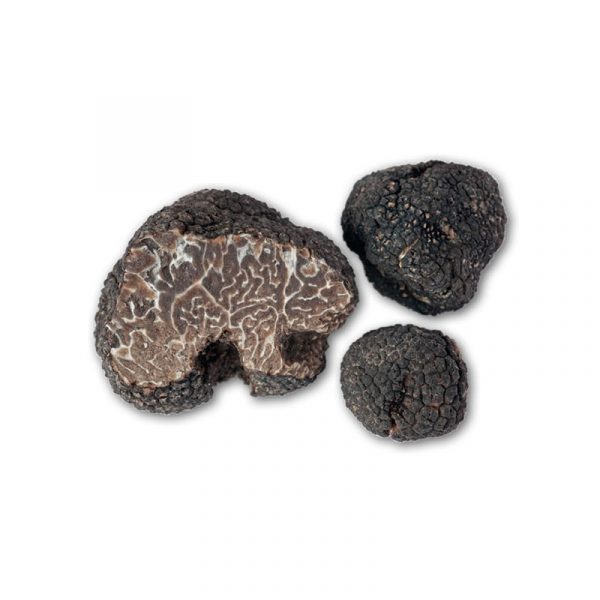 Shape: more or less regular globular shape; usually small in size, at most like an egg.

Peridium: finely punched surface, with polygonal, low and flattened tips (generally smaller than those of Melanosporum) which easily detach from the gleba. The color of the peridium is black, brownish black.

Pulp: brownish gray with sparser white veins and thicker than Tuber Melanosporum; these veins are rather large and striking.

It has no particular needs in terms of climate, but it wants medium-deep soils (so much so that it has the nickname “field black”) and with a certain clay content. Furthermore, this truffle also tolerates soils with a certain humidity.

The development of Tuber Brumale seems favored when the pH of the soil approaches neutrality or even drops to values ​​below pH 7. Less demanding of light than T. Melanosporum but more demanding than T. Magnatum, it is mainly located on the edges of the woods and in the gardens. 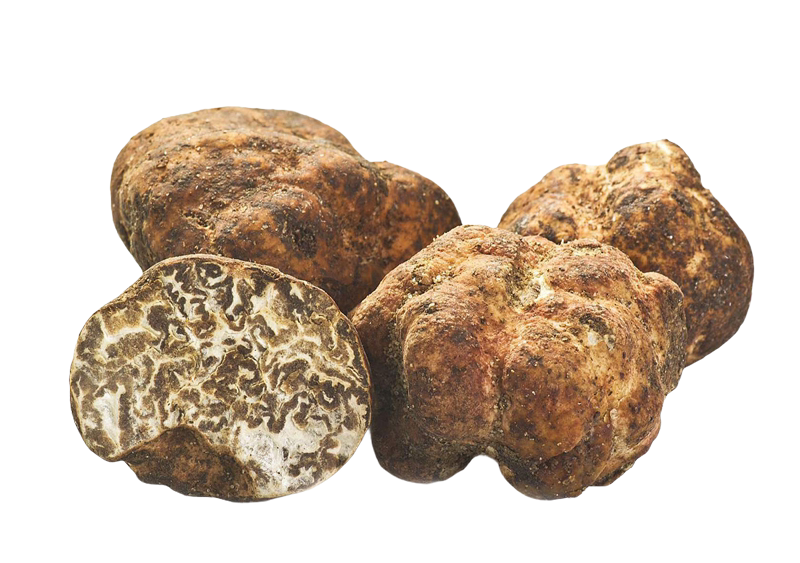 Peridium: the color varies from whitish to pale yellow and is very reminiscent of the Magnatum Pico (for this you must be careful not to get confused).

Pulp: the internal part is generally whitish, but with maturation it turns to pink and purple.